MD's Blog: Why all Society colleagues are adding their pronouns to their email signatures 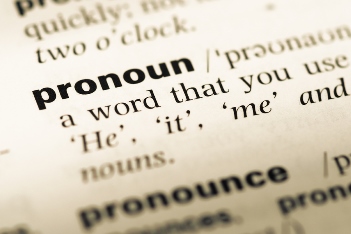 We recently decided to ask every colleague at Society to add their preferred pronouns to their email signature. In part, this change has been prompted by our current work with Stonewall on their Chief Executive and Chief Operating Officer appointments, but it is actually something we have been contemplating for a while.

My pronouns are ‘He/Him/His’. For a cisgender person like me (a person whose gender is in alignment with the sex they were assigned at birth), specifying my pronoun preference is a move that costs literally nothing. But stating my preferences explicitly can have a surprisingly profound impact on those who might otherwise feel marginalised. By implementing this change across the business, we want to help normalise the conversation around gender identity within our firm and, in turn, to signal to all the transgender or nonbinary candidates, clients or colleagues we might encounter in the future, that we are a safe environment. This is important, since transgender and nonbinary people often confront considerable anxiety and risk when broaching an initial conversation about their preferences and identity.

We understand that, for the majority of the population, the whole idea of pronoun choice is still unfamiliar territory. Gender-neutral pronouns like ‘They/Them/Theirs’ or ‘Ze/Hir/Hirs’ aren’t commonplace and don’t yet roll off the tongue. But rarity and difficulty aren’t good reasons to disregard the legitimate concerns and needs of people who may well be our friends, our colleagues and our family members.

We are obviously also aware that there are still some controversies relating to the issue of gender self-identification – particularly around the appropriate response within competitive sports and access to ‘women-only’ spaces. But to let those ongoing debates cloud this question of pronoun choice would be a mistake. Addressing people the way they wish to be addressed is entirely straightforward - it’s fundamentally a question of politeness and inclusivity. And it’s about being an ally to those who might otherwise feel isolated or alone.

If you’d like to learn more, I recommend this article on gender-neutral pronouns and how to use them, and this guide to using gender inclusive language in the workplace.

Between them, our team of experienced consultants and researchers work with a fascinating and diverse mix of organisations…