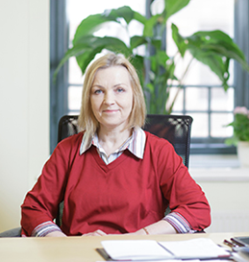 Dr Diana Pauna has been appointed as Dean of the Arts and Sciences at the University of Central Asia (UCA), which will open in Naryn, Kyrgyz Republic, in September 2016. Diana is currently the Pro-rector of the Stockholm School of Economics in Riga (SSE Riga), where she has been responsible for leading the undergraduate program in Economics and Business.

The University of Central Asia (UCA) was founded in 2000. Its mission is to promote the social and economic development of Central Asia, particularly its mountain societies, while at the same time helping the different peoples of the region to preserve and draw upon their rich cultural traditions and heritages as assets for the future. UCA seeks to contribute leadership, ideas, and innovations to the transitioning economies and communities of the region through modern educational and vigorous research programmes that produce knowledgeable, skilled and creative graduates.

Diana’s role will involve providing academic, intellectual, and administrative leadership across the School of Arts and Sciences and leading the ongoing developments of the School across all three campuses in Khorog, Tajikistan; Naryn, Kyrgyz Republic; and Tekeli, Kazakhstan.