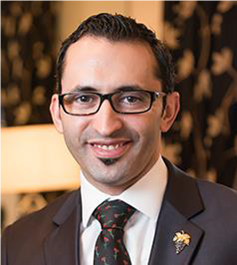 Having worked closely with the Oxford and Cambridge Club, we are delighted to announce that Emanuel Pesqueira will be their new Food and Beverage Manager.

Emanuel joins the Club from his position as Head Sommelier and Maitre D’Hotels at the Milestone Hotel, part of the Red Carnation Hotels Collection.

“I was contacted by James Lea from Society when I wasn’t looking for a move towards fulfilling my career goals and I was very satisfied with my current employer. James explained the new opportunity that I will have in the position in detail and what impact this role will have on my future career with Oxford and Cambridge Club. It has been a pleasure to collaborate with Society’s team in this process. I would recommend Society to any future employers and candidates.”

Emanuel will be joining the Club in early September and we wish him good luck in his new role.