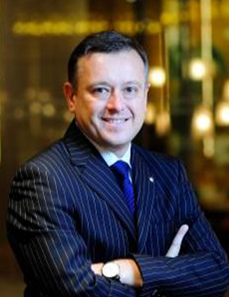 Andrew's role at HSH will oversee all aspects of operations at the Repulse Bay, whilst ensuring the globally-renowned Peninsula quality, service and standards are maintained at the Hong Kong Club, Butterfields and the Hong Kong Bankers club, which they manage.

The Repulse Bay residential community is built on the former site of Hong Kong's famous Repulse Bay Hotel (1920-1982). Today it is an oasis of tranquillity and nostalgia, consisting of two stunning sea-view apartment buildings with extensive sporting and recreational facilities catering to all lifestyles.